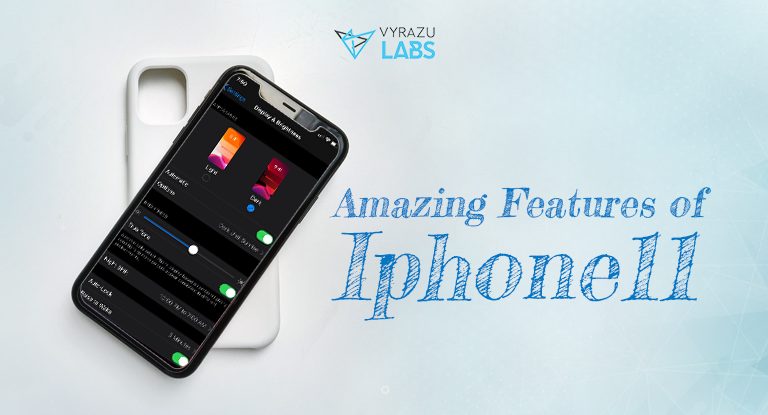 The new iOS 13 is about to release on 20th September 2019. Hurray! iOS 13 is coming with a lot of features and updates that we have not seen in the past. Everyone is excited. But do you know that the updates will awe-struck you when you read about them? We are Vyrazu Labs are personally very excited to see how the new iPhone 13 performs. The gold master looks amazing as you can see. Upgrading to iOS 13 is not a bad idea. Wanna know why?

Come let’s go through the new updates and features of the iOS 13.

The volume button that used to intrude whenever you increased or decreased the volume levels. Now, it is transformed into a slider that you will be able to control i.e. push back or front as and when you change the volume levels. The same goes for the mode controls that help you to switch your new iPhone 13 from ring to silent, etc. can be scrolled up and down as you please.

The music app in the new iPhone 13 has been revamped and made into a pro app by introducing the lyrics section. When you click on lyrics it will redirect you to the lyrics section and which has an amazing colorful background from where you can see the lyrics on the screen and follow the song that is playing. There is an option for up next which will tell you which song will play next, however, it is not as good as Spotify.

The 3D touch has refined and restructured. You can now drag the apps anywhere on the new iPhone 13 which previously was not possible. Even though Apple is thinking about excluding this option they has still improved this function in older devices. However, the haptic touch has been introduced in all the devices for better performance. There is 3D touch in the controls section, which will allow you to 3D touch the controls such as Bluetooth, wifi, etc and access it without changing redirecting you elsewhere.

The icons are smaller, sharper and bolder compared to the older versions. The icons have been redefined and made better for the user interface, apps like contacts, reminder, clock, etc have seen this change, hence goodbye boring icons! There is a new feature that allows you to select a dark mode that can be accessed from the controls itself, turning your new iPhone 13 blackish and will also affect the background and the wallpaper turning them black as well. The introduction of new wallpapers is awaited with this integration.

The performance of the app has become faster and the required storage has always been reduced. With the new update, the new iOS 3 has become 30% faster and the storage space is reduced by 50% i.e your new iPhone 13 will have more storage and speed inbuilt. Thinking about the battery life the new iOS 13 has introduced optimized battery charging. This is an extraordinary feature, this allows you to charge your new iPhone 13 without thinking about overcharging it. It automatically stops charging leaving 20% charge space for when you get up it fills the battery completely. This not only helps in saving power as well as the battery will last longer.

The new iPhone 13 has integrated the quicktype feature in the native keypad of the iPhone 13. The way you used to edit text has completely changed. You can edit text by moving the cursor anywhere on the screen, the magnifier has disappeared making the movement within texts easy. Now, you can control your new iPhone 13 by using different finger controls and make the edits you want. When you use three fingers and drag the screen backward it will undo the process you went through and if you move your fingers forward it will redo the action.

Safari to Files on iPhone 13

Safari has a new start page that displays favorites, recently visited and suggestions everything on the start page. When you start using Safari you will find that you can now, directly download videos, audio, other contents directly from the Safari app. In the top right corner, you will be able to see the download manager. When you click on your downloaded content you will be able to go to the file manager directly.

Clicking and Editing on iPhone 13

The camera on the iPhone 13 has always been an attraction for its fans. Now, that it has upgraded it is even better and has better options such as the high-key light mono which lets you take black and white images erasing the background around the main subject. The photos app has been influenced by the new update as well. When you visit the photos app you will be able to zoom in and out of the pictures changing the display.

As well as view the dates, weeks and moving on months when the picture was taken. The new way of editing images has introduced adjusting the intensity of the images and using the edit options was become seamless. Changing the general editor, making the markdown better. Editing a video has also become easy as it as you can stock photo app, size the video, add filters and control the editing entirely, using the native editor.

The maps on iPhone 13 have been updated in such a way that now you will be able to save favorites, share the location as you want and you will also be able to save the locations according to your visit. The most attractive feature in your iPhone 13 is that it shows the street images a feature known as look around. This is one of the best features as you will be able to see the street entirely not as satellite images but as a clear picture. Another sweet feature is the dictation feature introduced to the search option.

Both the messages and airdrop can be customized with avatars provided in the new iPhone 13. The avatar can also be customized to your heart’s content then set on the contacts that have no images getting rid of imageless profiles. Afterward, you can text those new contacts with emojis and stickers you like. The avatar list will appear on the side of the emojis panel and you will be able to choose from the emojis and custom made stickers to send them to your contacts.

Previously when you had to change the keyboard language to a secondary language you had to surf through the emojis then reach any other language. Now, there is a different icon for secondary language and the emojis have been added to the keypad. Hence, no swiping through different options to reach another language. The broken search in the messages section has been fixed and it functions exceptionally with a listed view of items sent or received. In this list, you will be able to see the images, links, and videos which are present in the messages section.

In settings, you will find the font control button which will allow you to customize your new iPhone 13 according to the font you want to choose and use. Downloading other fonts is an easy task so you can change the font whenever you like even within third-party apps. With the new iPhone 13, you will be able to attach controllers for playing games as well as attach a mouse called the cursor in iPhone 13 and use it within the iOS 13 devices.

There is a new feature in the App store called the Apple Arcade we have not seen how it functions yet but we surely will in the days to come. The new updated App Store of the iPhone 13 can be customized with your avatar. Pulling down the screen will take you to the Arcade section and you will be able to use it once it releases.

The Notes have a completely new look with a gallery view of the notes that you saved. Sorting the notes have become easy as you click on the top you see the options opening. The search in Notes has also been updated for an advanced search.

The Reminder app is remade with the toolbar at the top. When you select something in the bottom the selection is automatically taken up to the top of the list which makes sorting easier and better than other iOS versions.

In mails, it has been completely remodeled the tabbed view looks futuristic and way fancy. You will be able to see the messages, drafts, inbox, etc which will make switching easy in between tabs. You will easily be able to see swipe quickly using the new icons and the new controls.

In the new Apple iPhone 13, you will be able to sign in using sign-in with Apple which will be your universal sign-in for all the other websites and apps, so you will not have to sign-in separately in the other platforms.

The Home map has been introduced with security cameras for end-to-end inscriptions. The new wallpapers look amazing and intriguing, with the better performance you will not be able to complain about the device.

The Healthcare app has been updated, I mean why not? Every other app is been touched with update why not the most important app. Healthcare has been introduced with the new trackers like cycle tracking and many others which you can see only when you have an iPhone 13.

Now, you will be able to add shortcuts to third-party apps in Siri Shortcuts. Ask Siri to add anything you want in the shortcuts as everything is allowed to be added to the shortcuts panel. Now Siri’s voice sounds way cooler than it did, more human-like which is better than the previous versions. If any unknown number calls you, your new iPhone 13 will automatically silent the phone ring. However, the number pad screen still occupies all the screen space, maybe in the near future, we will be able to see an updated version of the same.

The new ARkit 3 is an advanced AR device that will allow you to hide objects behind people, there is an option for general tracking which will allow you to do the same. The AR items now look more realistic and you can play around with the ARkit as you want. It provides you with a clean interface, better buttons and later when you are done you will be able to see your artwork in the playing menu.

The launch of the iPhone 13 has overhauled on iPhone 12 no doubt looking at the new and advanced features you will want to make a switch. So, why wait? The countdown has begun rush in!! I hope you have enjoyed this article and have got to know about all the new updates that the new iPhone 13 features and now you can make a clear choice on which device you want to purchase. If you have any questions on the same don’t hesitate to mention it in the comments. You will appreciate your feedback and review for writing is never complete without its critics.