Magento vs Shopify — Which e-commerce tool should you rely on to serve the purpose of your online store? 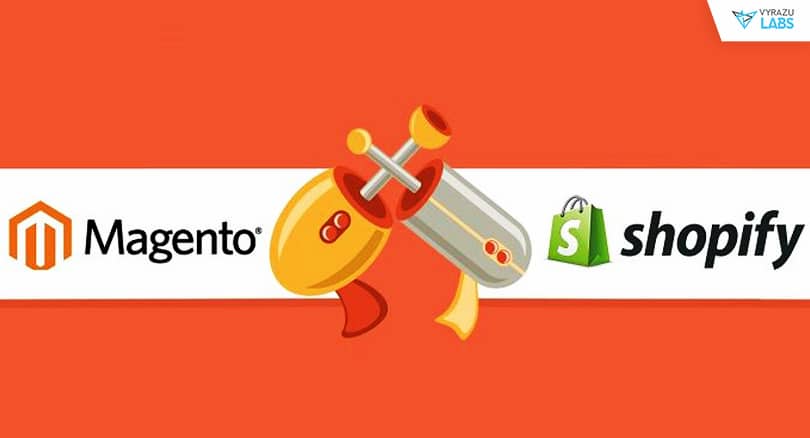 The world of e-commerce is split right down the middle over the choice of platforms to be used as an e-commerce tool. While Shopify has been around for quite some time, the arrival of Magento2 has somehow altered the dynamics of the existing equation.

E-commerce is a very important area of business operations these days and this is going to grow at an exponential rate in the future. You can get an idea from the fact that there was a rise of 23.3% in e-commerce sales as compared to the previous year, i.e. 2017.

All of the above lead to one direction — which e-commerce tool amongst Magento2 and Shopify to use for your online business and why?

A comparative study between Magento2 and Shopify:

Magento2 is by far more popular an e-commerce tool as compared to Shopify. A simple way to compare the two would be to have a look at the users of the respective platforms. Magento2 can show off Nike to be one of its user while Shopify can boast of Tesla in the same manner. Also, there are several mid sized companies who use Magento2  while at the same time others swear by Shopify.

As far as coding methodologies are concerned, there is a huge gap between the two  e-commerce tools. Shopify uses a language called Liquid whereas Magento2  uses PHP. Shopify is proprietary whereas ever since Magento2 launched itself as an e-commerce tool, it has been an open source platform. As Magento2  is open source, its source code is freely available but this is not the case with Shopify. So in case of Magento2 code can be altered to suit customised needs but the same cannot be done with Shopify.

Shopify uses the SaaS model which means that you have to pay fees in order to avail the service. The expense for the basic model is fixed at $29/month and rises upto $179/month. Shopify users can get access to more features by paying more per month.

The success of Magento2 as an e-commerce tool has a lot to do with the fact that it is free to download which is of huge advantage to small businesses. The cost of the Enterprise edition is dependent on the needs of the online store.

Features of Magento2 and Shopify:

The comparison of Magento2 and Shopify as an e-commerce tool from the functionality point of view has shown that Shopify is easier to set up when compared with Magento2. The basic features like shopping carts, collections, checkout modules are all available within both Magento2 and Shopify. The main difference is that Magento2 has more advanced features built into the system whereas in case of Shopify you need an app for extending the functions of your online store.

Both Magento2 and Shopify allow you to create and sell an unlimited number of products in your online store. One can very easily create products and collections on both of the platforms.

It is by far a consensus that for a large scale store with many products Magento is a better e-commerce tool as compared to Shopify. Shopify is good for small stores but if you have an online store which is poised for growth then you have to go for an e-commerce tool which is scalable and it is here that Magento2 leaves Shopify far behind.

Capabilities of the e-commerce tools:

Well, here you simply have to hand it over to Magento2  as it has over 5000 add-on extensions as compared to the 100 add-ons and apps for Shopify. It is because of this that Magento2 is considered to be a robust tool for online businesses.

If you use Magento2, every aspect of the business shall be under your control and if you happen to be the admin, you can create and manage many stores within the same admin panel.

Creation of a successful online property includes creating a unique brand which customers can recognise, relate to and respect. Now, as you are aware design is an important part of any branding exercise.

Magento2 and Shopify both offer many free as well as premium themes. There are many themes which are available for both platforms and they happen to be responsive, since more customers use mobile devices to shop online these days.

The only difference which gives Magento2 a slight edge here is that as Shopify themes are proprietary you cannot customise them too much for your needs which is possible in the case of Magento2.

There happens to be a division of opinion here as some say that shopify is easier to use as compared to Magento2 while others say the opposite. Magento2 incidentally happens to be easier to work with as it has ready made extensions. No coding is necessary when simple existing solutions are already present. In fact, if there were any shortcomings with the previous version of Magento, those have been taken care of in the latest version of Magento2.

In a study of 16 shopping cart platforms, it was Magento which came out on top with regards to SEO capabilities. The SEO features which are considered are headings, meta descriptions, titles etc. As Magento2 is more SEO oriented, if you choose Magento2 as an e-commerce tool for your online store, you can expect more organic traffic for your webstore.

Speed of the website is a very important factor to be considered in case of an e-commerce tool. It is a factor which affects the ranking of SEO results and is a determining factor which decides whether customers shall be purchasing items from your store.

Prior to the release of Magento2, Shopify was ahead as far as speed was concerned but with the advent of Magento2 the performance of Magento2 sites have dramatically improved. So, it is almost a level playing field now.

As compared to Shopify, Magento has a very large and active developer community who create solutions to attend to the needs of large sections of users. This ensures that business owners shall always find some developer to attend to their issues.

Well, it is  a bit difficult to say which ecommerce platform of the two — Magento2 vs Shopify is better. You should choose the one which best suits your needs after taking into account size of store, budgetary requirements, business goals etc. If you are looking for a small sized store Shopify is better but if you are looking for some store which you can scale up in the future and which has many different options, then Magento2 is surely the platform for you.

Also, you can have a look at an old blogpost which had taken up the same topic.

At our organisation, we have had a glorious past building scalable Magento based applications for clients. So, if you happen to have any requirement on this count please do not hesitate to get in touch with us.