Fool your friends with these top 10- best prank apps 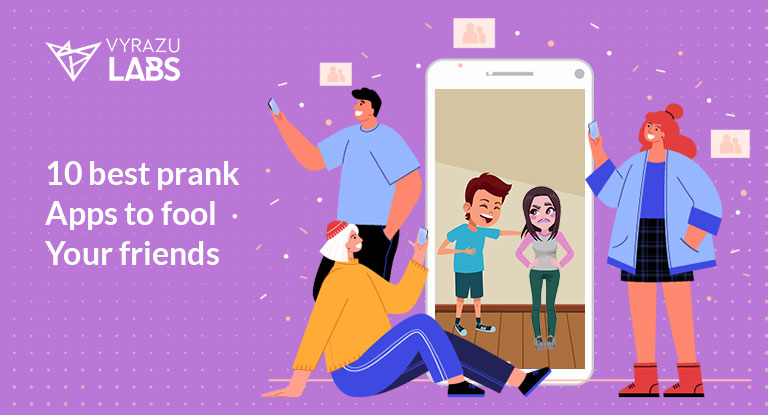 Gone are the days when you used to roam around with whoop cushions, now that we have smartphones in our hands we can move around with so many prank apps that will startle your audience even though they know about the existence of prank apps. It is human nature to get shocked when they are paying attention to something else. The best time indeed to scare someone. We at Vyrazu Labs often pull out pranks on each other, just the other day we were pulling out this trimmer prank app (this is added in our list) with one of our teammates, the impact was priceless!

Before you start reading the article. Healthy advice. Bear with me till the end to find out the best prank app that will make you *evil smile*. You might install the app right after reading this article.

The 10 best prank apps to start implementing on your friends for fun outcomes!

Who doesn’t like pranking, right? Did you know that there are innumerable best pranking apps, let us look at ten such apps that will make you feel like downloading them right away! You should, a little fun is highly contagious.

One of the best prank apps for Android is the Police siren app it will make police siren sound with flashing police lights. It will make your friends run when you start the app and the siren sound emits from your phone. Imagine you are sitting with your friends and you see someone doing something utterly wrong the app that you had downloaded for scaring your friends might come handy.

This prank app will flash the added led lights, will provide the electric signboard service and have updated siren sounds that will make your prank look real. You can also add this app to your widget collection and add it to your screen to access it whenever you want. There are similar prank apps on iPhone as well it is called Police Siren and Lights Pt.

This is one of the best pranking apps in iPhone with this app you will be able to emit the razor sound, your phone will go on vibration to give you the feel of using a real razor. Suppose you and your friends are off for a movie when the climax start switch on your phone and touch it in their hair. Wait for it. Look how they react. Capture it, share it. Make a funny video out of your friend for their birthday release.

You will also be able to see the picture of a razor on your phone that will make you feel like you are using a real razor. They might run or hit you. So, maintain caution when you use this app, for instance, hold your bag as a shield so that they can’t hit you directly. There is the best prank app for Android as well called the Hair Clipper Prank it has similar functions like this app. So, why wait, install the app and start faking hair clipping right now!

This is one of the best apps for Android text prank you will be able to initiate text messages from different fake people and pretend like they are real. What you actually have to do is choose an application for which you want to make the fake texts then choose from a fake name, number, picture from whom you want the text to come in your phone and concoct text messages from that contact, lastly start faking with your friends.

This app will allow you to customize all these features so that nothing looks unreal. Suppose your best friend is a possessive dude make up a fake contact of his girlfriend and when you and your best friend go out together make the texts appear in your phone so that it looks like she is really texting you, making fool out of your friend is always a very comforting and soothing task.

Of course, there is a catch you might end up in a fight, but you know what has to be done later. I mean come on you are installing the app for fun right! There is another catch to this app, you will be able to save the texts that you customize and share them with anyone you want. When Android has it iOS has it too. There is a similar text prank for iOS called Text Prank it will send you notifications of text messages on your lock screen making it look like a person texting you.

This prank app is available on both the devices you can use this app to change your voice accordingly. With the help of this app, you can fool your friends even when you are on a call with them. This funny pranks app will allow you to change your voice from a girl to boy and vis-a-vis you will also be able to record these voices so that you can send them to your friends and fool them as you like.

Suppose one of your friends has called, change your voice to an old person’s voice and fool them by saying you are your mother/father, fooling them only to record the call and share it in a common group later. Yes, you can make fun of your friends this easily. Once you download this app you will be able to see a list of options from which you can choose and change your voice accordingly.

This is a prank app for iPhone, it will work as an editor which will allow you to import your picture, your friends’ pictures, their empty apartment pictures anything that you want to edit in the app. After you have imported the image it will allow you to choose from different stickers and templates on top of the picture that you have already imported.

What next? Save it! Share it! Scare your friends by showing them ghosts in their apartments’. Suppose your friend has told you to wait in their apartment while they will be back in a few minutes. Quick snap a picture make a quick edit and share it saying you will wait outside rather sit inside the apartment. Watch them run for their lives when you have the last laugh.

This is one of the best prank apps for Android, using which you can fake your location. Suppose you are traveling to your friend’s place while you share a location that is 20 kilometer from their house, keep your earplugs ready, be prepared for the upcoming scream that has already initiated to reach you. You actually will be knocking their doors’ when they will be opening the door with a ‘shout face’. It will be fun, won’t it? However, there is a similar prank app for iPhone but I can’t guarantee whether it will work or not.

Come on its iOS, hope you know what I mean. You will also be able to share different locations over social media with your friends thinking you are actually traveling there. You can access the standard spoofing on any Android version. There is no root mode for Android 6 and above versions. What do you need to do? Just download the app, choose the faked location you want to share and the app will fake GPS go location in your phone on the fly GPS.

Were your friends thinking that you are a saint? Wanna fool them without making a massive change? You can use the Crack and Break it which is the best prank app for iPhone it will help make your phone look as if you have smashed it a million times, just by clicking on the screen a couple of times. Show your friends how angry you can get when they pull off pranks on you.

If you can make your phone look like that, ahem, ahem, what about their faces? Of course, this app is quite famous you will also get this best prank app for Android with a different name that is Broken Screen Prank. These apps perform the same, you will be able to break your screen into zillion pieces and a while later use your phone as it was. Tada.

You can also fool your friends by installing this app on their phones when they are not present in the room and preset a time for when the spider will appear. Happy scaring! You can find a similar app on iPhone called snake screen that will allow snakes to appear on your screen. It is an interesting app if you ask me. Imagine someone is busy doing something else and your phone is kept beside them suddenly snakes start appearing in your phone just imagine the look on their faces.

One of the best prank app for Android users. When you use this app it will ask you to choose from two bombs one is a clock bomb and the other one is a digital time bomb. You will be able to customize the time span of the blast encouraged by amazing graphics of a powerful clock bomb. As soon as the fake bomb explodes your screen will break into pieces as if your phone was the bomb itself.

It also comes with some added features like a minesweeper game, two new bombs to play with and an improved bomb explosion effect and sounds. Suppose you are at a party filled with people all scattered around you, suddenly when they hear the timer they start running here and there, of course, someone will call out loud, “there is a bomb”. Then BOOM! Nothing happens. Just a prank with your folks. Here, again be careful of flying food and paper cups.

The ultimate pranks app for the pranksters. This funny pranks app will provide you with a whole lot of pranks that you can pull out on your friends. This Prank Pack provides you with different features such as scissors, farts, fake broken screen, hair trimmer, fake crash, farting camera, laugh track, fake fingerprint scanner, fake blue screen of death (frozen screen), fake radiation detector, fake universal detector, and sound bomb. Now, imagine what you can do with these features on your phone, that too all in one app.

*Note–There was nothing like the best app, we recommend all of them as they are equally healthy and harmless to use. So, a little prank through this article was intended and we feel that you should try out all these apps as they are the best of the lot.*

The Types of Prank Apps

Hope you had fun. Did you have fun? Will you tell me that in the comments sections? Or maybe you could leave a comment or feedback on if this article at all was useful and you had the last laugh or not. Anyhow, do you want to make such apps? You can, I mean imagine people showing you a prank app that you have introduced in the app store or on Google Play. It would be fun to watch them boost your own app, right? If you are interested reach out to us we will help you make prank apps that will actually bring you money as well as a lot of fun seeing your friends pranking their friends using your app check out our services if you will. This is Goodbye, I am sure you will choose the best app among these to use around your friends.